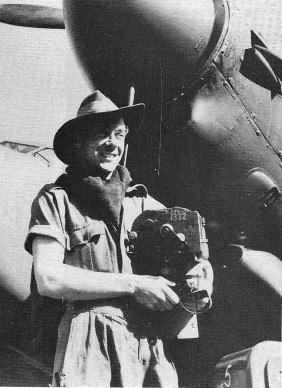 One of the few photographers awarded the DFM

Awarded for gallantry over enemy territory in Burma

At the advent of WW2, Alan Fox volunteered for pilot training but failed due to defective eyesight. However, his previous experiences in a factory producing roll films, let him into the RAF as a photographer.  He was given the chance to volunteer for operational aircrew duties and was sent to India at RAF Risalpur and RAF Lahore and finally to Rangoon in Burma.

The Japanese advances caused a retreat to RAF Dum Dum near Calcutta where 3 PRU Squadron was organised and spilt into 681 (tactical) and 684 (strategic) reconnaissance.  Hurricanes and Spitfires took on the tactical roles whilst B25 Mitchells fitted with extra fuel tanks took on the strategic role.  The CO called for volunteers from the photographers to fly with the B25’s.  He was on “Ops” for nearly two years and was then awarded the DFM for “consistent coolness in the face of the enemy”.  At that time the targets photographed were mostly beyond the range of normal PR aircraft and this continued until later in the war when long range PS Mosquitos aircraft came on the scene  He described the sorties as “a mixture of monotony, some fear, aesthetic pleasure and discomfort”. In addition he still carried out normal duties in the photo section, processing and printing the many hundreds of feet of air films.  He received a few pence flying pay, however, being classed as only “part time aircrew” was not eligible for Sergeant rank.

After the war he went up to Ruskin College Oxford, taking a full diploma in public administration.  He took a degree in Philosophy, politics and economics in 1950 and went on to a research fellowship at Nuffield, to become a Don at Oxford University.  He took a lectureship in sociology of industry at Barnett House. He formally retired at 60.