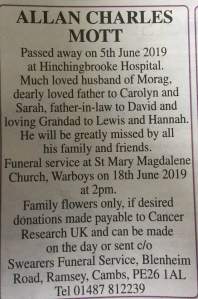 Steve Fitton R.I.P. Charlie. Your sorting days are over. Sleep well.
Matt Haig RIP Charlie – a finer fellow as I have ever met 🙁
Scott Mitchell R.I.P Charlie . I remember your bike riding . 😢
Tim Chandler RIP Charlie, Unfortunately I am busy on the 18th but I am sure there will be a turnout. Condolences to all the family.😢
Paddy Hill RIP Charlie, was always a gentleman. Thoughts and condolence are with the family.
Neil Rogers RIP Charlie, a lovely chap.
Phil Ellis Sad news and a stalwart of JARIC in the early 80’s. RIP
Kevin Howes R.I.P. Charlie A legend and really funny guy
Simon Butcher RIP Charlie. Sad news.
Steve John Cassidy JARIC legend. RIP Charle.
John Chorley RIP Charlie – 3 MFPU Laarbruch ‘72
Rick Fiskel Worked with Charlie in film library at JARIC. Nice guy. RIP
Michael Windle I remember Charlie from Wyton. RIPRobin Patrick Ellwood Michael I worked with Charlie in the Photo Factory between 74-76
Ian Rossiter RIP Yes A JARIC Legend was there early 80s when I was, a very good bloke
Tony Gibson I remember Charlie from Wyton in the 70s. A good man R I P
Chris Player Aye, Charlie was at the factory, mid – late 70s….sad news
Chris Player Mr Ellwood, do you remember an incident when someone drove a mini van in through the front doors and nearly knocked over the duty SNCO?…..
That was me then, but the guys name escapes me for now..
Neil Latham RIP Charlie . Gentleman.
Terry Knight Sad news, Per Ardua brother
Dave Peel RIP Thoughts and condolences with the family
David Archer RIP
Chris Nichols Such sad news. Legend of JARIC and had a unique bike riding action. Lovely guy. Last time we spoke he was telling me he had sold the rights to his train station photos to a magazine for a tidy sum. People took the mick as a train spotter, but he had the last laugh. RIP Charlie.
Neil Rogers Chris Nichols I’d forgotten about the bike riding. Made me smile.
Neil Latham Film prep at jaric and radiation control on exercises. Early 80s .
Mark Fallon Neil Latham I remember him doing the radiation thing! RIP Charlie. 😔
Colin Jackson I remember him, early 90’s like you Paddy.
Martin Gill RIP
Matt Haig RIP Charlie – as has been said, a true gent and legend
Paul Wiseman When he wanted to sell his caravan at Cosford he took a photo of it, put it on a For Sale sign – and stuck it in the window of his caravan.
Doug MacDonald R.I.P Charlie
Ken Manley Remember him well. RIP Charlie!!!
Tim Muncaster I was with him at Brampton, always like Charlie! Damned shame!
Nigel Caulfield RIP Charlie 😢
Al King Sad news. Nice guy, Rest In Peace, Charlie.
Tony Fox I knew charlie from wyton ,very sad news, RIP
Derek Gallon RIP Charlie . Condolences to the family
Derek Ashman By Charlie miss that walk
Del Griffiths I remember Charlie from Brampton in the 1980’s, RIP Charlie!
Pete Holland RIP Charlie…. You were a gentleman with a heart of gold.
Edwin Hedges RIP Charlie a true gent.
Mark Hill My neighbour for a few years at Brampton, RIP Charlie.
Roger Williams One of my most reliable lads. Very sad news
Neil Thrush Always known as Charlie Mott, I remember his request on his last day of Service at JARIC could we call him by his proper name “Alan Mott” which so few knew him by. Without being rude Charlie by name & Charlie by by nature is how many will remember him by. A heart of gold and he wished only the best for everyone. I have positive fond memories, RIP Charlie, your Service has been completed.
Gordon Rodger Sad news, a real gent, RIP Charlie. Condolences to the family.
Gareth Mills Sad news, RIP Charlie. Per Ardua
Dave Whitter Its so sad seeing so many go and all too early
Nigel Burton RIP Charlie, a true gentleman
Keith Clothier Worked with Charlie at Wyton. I remember he was selling his caravan so took a photo of it and displayed it in the caravan window so you could see what it looked like 😅 He was a decent a gentle guy RIP
Ian Rossiter I remember that Keith
Andrew Aveyard One of the friendliest people I have met. Sad loss. Thoughts and prayers with family etc.
Nick Mcglynn I remember him from Brampton in the 1980’s. Condolences to his family. RIP Charlie.
Renny McIvor Worked with Charlie at JARIC a sad loss. RIP
Gary Worsley RIP Charlie
Robin Patrick Ellwood I was in the Photo Factory at Wyton with Charlie 74/76. I have photos somewhere taken outside our accommodation block opposite the NAAFI with a whole bunch of us APOs goofing about. Per Ardua Ad Astra RIP
Dave Whiteman I also remember Charlie from my relatively short time in JARIC. A nice guy and a true gentleman. The number of posts on here testament to his popularity. RIP Charlie.
Martin Parkes Worked with Alan at RAF Wyton Photo Factory in 1976. Taught me all I know about T12s. Sad day 😦