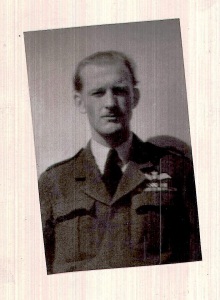 A full Record of Service to follow from RAF Disclosures, Cranwell, via Greg Lance-Watkins his son 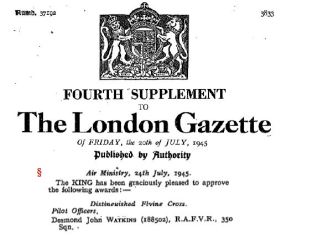 DFC Citation
“Pilot Officer Watkins is now on his second tour of operations. He has destroyed four enemy aircraft in the air, one on the ground, and damaged one. He has also destroyed or damaged at least 56 enemy transport vehicles, frequently encountering heavy anti-aircraft fire. He has at all times set a high example to his fellow pilots”
By the time of the last hostile operational sortie in Germany during May 1945, and which he led, Flying Officer Watkins is credited with a total of 11⅓ wartime victories.
Five victories qualified a pilot as an Air Ace. 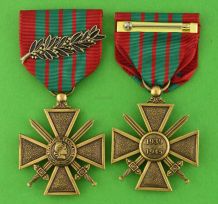 The Croix de Guerre (Cross of War) is a military decoration of France/Belgium. It was first created in 1915 and consists of a square-cross medal on two crossed swords, hanging from a ribbon with various degree pins. The decoration was awarded during World War I, again in World War II, and in other conflicts. The Croix de Guerre was also commonly bestowed on foreign military forces allied to France.

The Croix de Guerre may be awarded either as an individual award or as a unit award to those soldiers who distinguish themselves by acts of heroism involving combat with the enemy. The medal is awarded to those who have been “mentioned in dispatches”, meaning a heroic deed or deeds were performed meriting a citation from an individual’s headquarters unit. The unit award of the Croix de Guerre with palm was issued to military units whose members performed heroic deeds in combat and were subsequently recognized by headquarters.

After a brief break from the Royal Air Force after the war, D.J. Watkins spent time in India as B.O.A.C.’s operations manager. He rejoined the R.A.F. and became one of Britain’s first jet instructors on service aircraft at the Central Flying School (CFS) and RAF Valley.

Flt. Lt. D.J. Watkins, DFC, CdG avec Palme, was O/C the Photographic Training Unit at Cosford for several years. (Transferred to RAF Technical Branch (1953) O/C Photographic Training Unit, No.2 School of Technical Training, Cosford (until 1963 ?)) During a motivational talk he derided the Royal Navy for its use of the soubriquet the “Silent Service”.

He asserted this was rightfully appropriate to the Royal Air Force and its Photographic Reconnaissance Units. He was much more than the sum of his parts.

With the encouragement and support of Greg Lance-Watkins, his son, I am collecting what I hope will be definitive details and dates from his Record of Service. Thus far no information has been forthcoming from the Museum of Photography at Cosford.

More information is being collected and will be shown here when available.