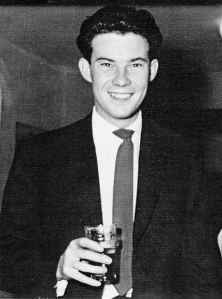 It is with great sadness that I have to tell the group that Joe Dunbar, sadly passed away a few days ago, in hospital. He could be a prickly character, but was always an excellent work colleague and friend. He’ll be sorely missed.

Don Stewart – RIP Joe, my first Cpl and last WO.

Kevin Howes – R.I.P. Joe What a character he was . Remember how he greeted me back at JARIC when I got drawn out of a hat at JSOP for the Gulf War. I think he enjoyed that moment 🙂

Keith Morton – This is really sad especially after George Marshall. I served with Joe in 4sqn RIC in Germany. RIP Joe.

Simon Marshall – RIP Joe, very clear memories from the days in the back end, as you say he could be prickly character. Sad to hear of the passing of my first WO.

Richard Severn – Sad news when anyone passes. he used to make me smile more than angry and I’l never forget him shouting down that corridoor .. ever 🙂

Andy Richardson – RIP Joe, his bark was worse than his bite and he was always good to me! Some great memories of him at Jaric…!

Mat Redrob – Never heard him swear. Unless he was using my name

Paul Edward Atkinson – RIP Joe. The big crew room in the sky gets another member. Just wont be any beer calls on a work night. Or Friday.

Delyth Woods – Sorry to hear this news. As you said, prickly, but a good heart. ♥️

Rick Brewell – So sad, I had a great repartee going with Joe ever since as an SAC at Brawdy in the 70’s I barked at Sgt Dunbar to get off the floor I’d just mopped! We had a mock fight every time after whenever we met! Served with him there, Gutersloh, Bruggen and JARIC. RIP friend.

Will McConnell – RIP Mr Greengrass, who thankfully couldn’t run as fast as this Plotter.

John Cassidy – My Flt Sgt at Bruggen. A character indeed. Sure he had shares in Daihatsu, trying to get everyone to buy a Charade… RIP Joe

Martin Gill – RIP Sir, very fond memories of upstairs at JARIC with Joe being my WO

Sponge Beattie – I am saddened to read this. He helped me like no other WO. He even called me when I got promoted to congratulate me. He had been out years. Underneath, a very caring man,outwardly a brash grump.RIP Joe. Very sad indeed.

Tim Macdonald – RIP you will always be remembered as a good friend.

David Abel – Also my FS at Bruggen, he chided me during bulling for Station Commanders Inspection when I muttered under my breath “didn’t join the RAF to clean f****** lights & blinds”, dragged me into his office & said without a hint of sarcasm “he was sorry the RAF wasn’t meeting with my expectations, was there anything he could do personally to cheer me up” I said well Flight I could use a cuppa, he roared with laughter at my cheek & made everyone a brew. He said “ son you may talk shite, but I kinda like you so do me a favour, clean the f******g lights & blinds just one more time for me”! Legend!!!!

Steve John Cassidy -David Abel how about those copper pipes in the loos in the Marel!! His pride and joy!! David Abel – Yes & I painted them black remember me having to scrape all the bloody paint off? Lol

Terry Knight – Per Ardua brother. Met both sides of this man during my time, feared like Whiskey Walker, respected equally too. Always a character in the trade.

Dave Peel – RIP my great “grumpy Jock” friend. Our thoughts are with Pauline and family.

David Archer – I often got on the wrong side of Joe at Gutersloh, another good character gone. RIP

Gordon Rodger Very sad news. Another of the good ones gone. He could be harsh but was fair ……(mostly). RIP Joe, condolences to Pauline and the family.

Neil Johnstone – My W. O. when I arrived at the big J as a fresh faced LAC. He wouldn’t sign my leave pass until I’d done my 1.5 mile run! Fond memories

Edwin Hedges – More sad news. A great character. He was my FS at Bruggen and WO at JARIC. Every morning at Bruggen he used to call me into his office, and so everyone in the crew room could see he would give me a stand up bollocking. When i asked what it was for he used to say just in case you do anything wrong. He would always defend his men if others tried to criticise them. You always knew were you stood with him a fair man in my experience. RIP Joe thanks for the memories. Condolences to Pauline and family. X

John Chorley – I remember him as a corporal, he was almost fun then!

Keith Morton – It’s great to read all the comments about Joe. I served with him when he was a Sgt at Gutesloh in the 70s yes he could be tough and shout a lot but I got on really well with him. On deployment he came into his own he ran a brilliant beer tent the envy of the site and his cheese grotts were to die for. Great guy… RIP Joe and enjoy the great RIC in the sky.

Chris Goodwin – I remember him as a grumpy ‘whirlwind’ of a guy with a great dry sense of humour. A good lad….as long as you did your job & didn’t piss him off.
A great character.

Steve Tindale – He had his critics & Joe & I had a few ‘disagreements ‘ but he was a character. Particularly remember when a baby PI straight out of Wyton complained that I wasn’t doing what he wanted. Joe got involved & basically tore him a new one & informed in no uncertain terms that instead of complaining ‘that you should listen to the airman Sir….he’s forgotten more you’ll ever know!’… RIP Joe you old bugger.‎

Geoffrey Massey – So sad to hear about the death of Joe Dunbar. He and I followed each other to postings starting at RAF Wellesbourne, 1958ish, continuing with tours of Germany and of course at the early RAF photographers reunions at RAF Brampton and Wyton.

He was a very likeable “larger than life” character.