Celebrating the lives of photographers who began their career at the Royal Air Force School of Photography and its origins founded by the Royal Flying Corps at South Farnborough in 1915. 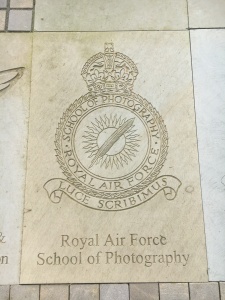 The Paving Stone in situ, installed and opened to the public in October 2016

Our Paviour is in the bottom left corner of the picture

3 thoughts on “The “Heroes Square” memorial”